MOVE over Captain Cook.
Likewise, Abel Tasman, William Dampier, Willen Janszoon, Cristavao de Mendonca and Zheng He – the title to Australia’s discoverer belongs to someone hundreds of years earlier.
Precisely who arrived on the Great Southern Land’s shores first – after Aborigines 40,000 years ago, that is – has been the subject of learned debate for many years.
But a little-known fact is Muslims beat them all, arriving as early as the Ninth Century.
Ocean Grove academic Dr Dzavid Haveric points to a map drafted in 820AD by Persian cartographer Muhammad Ibn Musa al-Khwarizmi as clear evidence Muslim seafarers found their way to Australia long before any navigators from Europe.
He cites another map, in 934AD, by Muslim cartographer al-Istakhri, as further evidence.
Dr Haveric’s 2012 book Muslim Discovery of the World also told of the discovery in northwest Australia of Arabic-inscribed coins from Kilwa, off the coast of Tanzania, possibly the result of a shipwreck.
A discovery this year of more Kilway coins, dating between 900AD and 1300AD, in the Northern Territory has added even more weight to his Muslim discovery theory.
“I’m not surprised the coins were found in Australia. In my book I indicated previous Islamic coins found in Australian waters,” Dr Haveric said.
“They support my claim that Australia was discovered over the course of centuries by different ethnicities.”
Dr Haveric said al-Khwarizmi , who drafted the 820AD map of Australia, New Guinea, the Indian Ocean and the Horn of Africa, was the same man who devised the Arabic numerical system adopted by Western civilisation.
“He’s the same scholar who invested Arabic algebra, based on ancient Indian numerals, and he’s the first mapmaker of Australia,” Dr Haveric said.
“This is our Renaissance, our Enlightenment.’’

Mr Kim Mubarak-  an Australian Muslim is taking on traditional major political parties for the seat of Stirling in the forthcoming federal election on 7 September. He hopes to make an impact by taking critical Muslim and non Muslim votes away for Liberal and Labor parties who do not serve the interests of marginalised groups in our communities.  A political science graduate from Murdoch university and a human rights advocate will shake the established power structures with his no-nonsense approach to grass roots politics.

He hopes to campaign hard for family values and social justice in Mirrabooka, Noranda, Balga, Daniella,Lockridge,Westminister and surrounding suburbs. Already good support is being received from within our Aboriginal Australian communities, migrant and Muslim communities who face discrimination and marginalization by institutionalised racism and State’s social control policies.

Record number of WA candidates to contest  in the 2013 federal elections as reported by the West Australian’s on-line  WA TODAY NEWS. 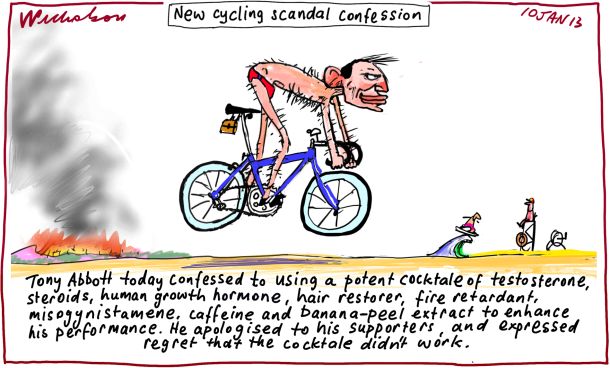 Courtesy  of Nicholson Cartoons
The Australian

Courtesy  of Nicholson Cartoons
The Australian

Southern River Mosque project once completed will be Western Australia’s largest mosque marking a new shift in the diversity of metropolitan mosques in Western Australia.  Named as “Masjid Ibrahim ” after Prophet Ibrahim (AS) this mosque will have additional facility for religious scholarship and training for WA’s imams. The planning approval and regulations are often difficult to obtain as other mosque projects in WA have been rejected.

It is good to see two massive projects taken on by sections  of the WA Muslim community.

Another Masijd project in Swan Valley is estimated to cost about $7 million is an indication of financial costs for building modern places of worship.

A new law that would require Muslim women to remove their burqa to prove their identity to WA police has been introduced to state parliament.

A new law that would require Muslim women to remove a burqa or niqab to prove their identity to West Australian police has been introduced to the state’s parliament.

The legislation was drafted in specific response to public outcry about the case of burqa-wearing mother-of-seven Carnita Matthews, who had a conviction of knowingly making a false statement quashed.

Ms Matthews was originally given a six-month jail sentence after being found guilty of falsely accusing a senior constable of forcibly trying to remove her burqa when she was pulled over while driving in Woodbine in Sydney’s southwest in June 2010.

She was later acquitted on appeal after the prosecution could not prove she was the woman who signed the statement while wearing the garment.

As part of WA’s Criminal Investigation (Identifying People) Amendment Bill, the law will require “a person to remove headwear or do other things to facilitate the officer being able to confirm a person’s identity”.

Officers will also get explicit powers to detain a person while they comply.

It will apply to an item of clothing, hat, helmet, mask, sunglasses or “any other thing worn by a person that totally or partially covers the person’s head”.

The WA parliament will be told the law was in direct response to the NSW case.

“Having regard to that case, the government has taken action to ensure that similar injustices do not occur in Western Australia,” Attorney-General Michael Mischin said.

“The amendments provide a explicit power … where the subject person refuses to remove an obstruction that is preventing the officer from being able to identify the person’s face.”

The constitutional problem this  punitive law creates is, whether under section 109 the Commonwealth of Australia, the High Court can declare this State law inconsistent with laws of Australia?

Under section 116 of the federal constitution, Federal law clearly prohibits the State from enacting laws for or against a religion.

In the minds of the Western Australia’s Muslim community this is  an anti Muslim law directed at their devote Muslim women who wear the burqa by their freedom of choice for religious reasons.

The Colin Barnett’s Liberal-National State government did not consult Islamic Council of WA  or the Masjlis Ulama of WA when it was  planning to make  this into law on Eid day, a  sign of pure contempt for West Australian Muslims.