Honorary Fellow at University of Melbourne

Refugee protection should go beyond a legal obligation to asylum seekers and refugees.AAP/DIAC

Defining “success” in refugee protection can be a tricky proposition. It could be a reduction in the number of people displaced worldwide, places made available for refugee resettlement or the number of countries that have signed the Refugee Convention.

One thing is for certain: the recent riots on Manus Island that led to the death of one asylum seeker and injuries to more than 70 others highlight the failure of Australia’s current response to refugees. That one more person has died trying to find safety in Australia is a tragedy that we must learn from to ensure a better situation for asylum seekers and refugees.

The practice of outsourcing responsibility for refugees is the first issue requiring critical attention. Over several decades, this approach has gone from being the rare exception to common practice. Detention centres are being managed by private companies and agreements made with neighbouring countries to host asylum seekers.

Yet what has happened on Manus Island highlights that Australia cannot avoid its protection obligations towards asylum seekers, irrespective of any number of commercial in-confidence agreements and bilateral partnerships. Immigration minister Scott Morrison still has to answer questions about processing arrangements on Manus Island and must ensure an appropriate review of the situation which could include suspension of current transfers.

For too long, Australia’s policies towards asylum seekers arriving offshore have been guided primarily by security considerations. This was never the intended spirit of the Refugee Convention, founded as it was on the need to protect asylum seekers and provide them with guarantees of safety and asylum.

Current protection measures in most Western developed countries include mechanisms for assessing people’s asylum claims in the territory where they arrived, offering them permanent protection if they are found to be refugees and, making sure return is safe and dignified if a person’s claim is not upheld.

Measures to increase the number of barriers for people fleeing persecution, such as increased patrols and the threat or otherwise of boats being pushed back, has led to deaths and stopped people in genuine need from reaching Australia. Taken from any perspective this cannot be lauded as a “success”.

Re-orienting Australia’s refugee program towards one that is centred on protection would also reduce the mental health anguish faced by asylum seekers and levels of self-harm currently found in detention centres.

It was alarming to hear Morrison refer to “transferees” in his press conference and see this phrase repeated in the media. The use of dehumanising language that reduces a person to a label is part of wider practice of bureaucratic speech that has crept in to refugee debates in Australia.

Think of the words we now hear frequently when referring to asylum seekers and refugees. Detainees is a commonly used one, more often associated with prisons than with refugees in need of protection. Worse still are illegals, Irregular Maritime Arrivals (IMAs) or SIEV (Suspected Illegal Entry Vessel). 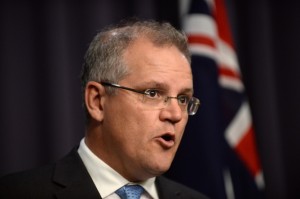 Scott Morrison still has to answer questions about processing arrangements on Manus Island in the wake of violent riots there. AAP/Alan Porritt

Behind all these labels and acronyms are people, with tales of persecution, stories of loss and claims for asylum. It serves no-one, except a government trying to further distance concerned citizens from asylum seekers, to continually employ such labels and dehumanise asylum seekers.

This practice, that reduces any humanity from the label “refugee”, also risks jeopardising Australia’s refugee resettlement program and the support given to assist refugees to integrate into Australian society. How is a person meant to distinguish between a “good” refugee or “bad” IMA? Where is the space for refugee stories to be told that break through these hardened stereotypes and tired, inaccurate labels?

Refugee protection goes beyond a legal obligation to asylum seekers and refugees. It also requires an enabling environment that supports the rights of refugees and does not foster prejudice or discrimination towards them. Ensuring appropriate language and accurate terminology is another important component making up a refugee protection regime.

The challenge of hosting asylum seekers and refugees is being felt worldwide at present. From countries like Pakistan which host over a million Afghan refugees, to Lebanon, Jordan, Iraq and Turkey which are struggling to respond to the outpouring of Syrian refugees, with 1.3 million people leaving Syria in the first half of 2013 alone. In all these places, refugee protection comprises a mix of responses, policy measures and legal mechanisms.

Refugee protection should be judged by its ability to provide asylum seekers and refugees with the rights to which they are entitled, bearing in mind considerations of national sovereignty. Given the recent events on Manus Island, Australia needs to take a hard look at what constitutes refugee “protection” and urgently re-think the principles that inform its asylum seeker and refugee policies.

A new look into the state of Global Islamic Economy

In a ground-breaking study of global Islamic economy, Price Waterhouse Coopers, Standards and Poors and Australian Trade Commission have published a long awaited report on Islamic finance and its implication for Australia in the Asia Pacific rim in the 21st century. The study found that in light of recent 2008-2009  Global Financial Crisis (GFC) and the growing instability and unease of Western capitalism it is opportune time for frank discussions and re-examination into a more stable global Islamic financial system.  There is nothing new in this phenomena for the human civilisation. This is the same peg of Islamic financial stability that held the international trade and commerce  in the Dark Ages throughout the years of the Crusades for three hundred fifty years.

Muslim merchants and traders from as far as Muslim Spain helped penetrate and helped these dark corners of Europe with their sound economics management ideas. The merchants helped introduced international contract laws, international treaties and trade under a robust Islamic financial trade that was well respected in medieval cities of Venice and Rome despite  Rome, France and later Russia were at war with Islamic power of the Ottomans (Uthmani Turkish Empire) up till the 16th century of the Christian era. With the turning of wheel of time symbolised by the rise of powerhouses of China and India as the two ancient civilisations determine the future of global economy it is of no surprise another ancient financial system that held Europe together is being re-examined to help prevent a total collapse of international economy. Australia in 2014  has woken up to the report’s finding where $4.1 trillion dollars of untapped potential exists in Islamic banking assets in its core markets in its region and the Middle East. Australian financial sector has opened Islamic financial products and a good number of Australian Muslim businesses have further enriched this growing financial area with Islamic home mortgages, halal superannuation and business loans services to the growing robust Muslim population in Australia.

The  fallout from last week’s under age marriage of a 12 year old Sydney minor with a 26 year Lebanese man  on student visa has drawn fire from the Grand Mufti Dr Ibrahim Saleem.

Dr Ibrahim expressed his disappointment  and warned  Australian Imams who are registered marriage celebrants to take extra care when conducting marriages between Australian Muslims and foreigners. The  Australian Marriage Act must be upheld he said. It  is common sense that age must be verified with civil marriage papers or documentary evidence.  The Mufti also urged all Muslim  marriage celebrants to keep on the look out for unscrupulous  Muslim parents who marry off their under age daughters for cultural or tribal reasons.  The Mufti was troubled that the 12 year old minor and the 26 year old man had sexual relationship during this period and for this reason he was pleased that the Lebanese citizen, the Muslim celebrant and the father of minor were arrested and charged under NSW criminal laws. The court hearing of the three  will be heard in a NSW magistrate court next week.

Revelations have emerged this week that a 14-year-old girl was forced to marry an alleged Sydney gang member.

The allegations have brought the issue of child marriage into the public spotlight, with details emerging that the child was allegedly raped and beaten.

This recent incident follows a similar so-called marriage between a 12-year-old girl and a 26-year-old man in Newcastle.

Census statistics show that hundreds of young people under the age of 18 are living in married or defacto relationships in NSW.